Welcome: The Meeting was called to order at 7:32 p.m. by Membership Chair and Acting President Anne Carbert, who welcomed returning members, guests, and visitors. She then acknowledged that the land we occupy was land formerly used by various tribes of natives, including the Wendat, Chippewa and Anishinaabe. After a brief overview of the events of the evening, she introduced Mary Jane Amey, Past President and current chair of the Scholarship committee.

Award of Scholarships: Mary Jane reminded the audience that the Scholarship Fund is a registered charity that provides tax receipts for donations. CFUW provides scholarships to graduating students at the three high schools in Stratford and three additional scholarships to mature students who are returning to school. Two mature students were presented with scholarships; Aaron Lloyd, who graduated from Seaforth High School, trained and worked as a Developmental Care Worker, and had two children before upgrading her math at Conestoga College.  Dawnelle Streicher graduated from Listowel District High School as an Ontario Scholar, and decided to work for a few years before upgrading her chemistry and math to be admitted in to the Nursing Program at Conestoga College. Both were presented with their awards amidst applause. 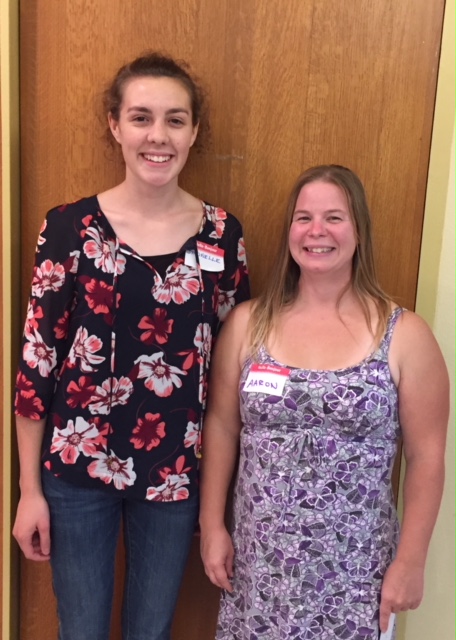 Fundraising Committee: Speaking on behalf of the fund-raising committee, of which she is also a member, Mary Jane briefly outlined the three projects for this year

She asked the members of the quilters group and then members of the fundraising committee to stand to be recognized. Mary Jane recognized the success of member Carol Rankmore in the publication of her book “Polio Child: My Life from a Children’s Hospital to Post-Polio Syndrome” It is available at the Stratford Public Library for those interested. She concluded by thanking Brenda Herman form Avondale United Church for allowing us to meet in the newly renovated church.

Introduction of CFUW: Anne resumed the podium to provide guests and new members an outline of the benefits of membership in CFUW. We are part of an international, national, provincial and local organization committed to the education of women and girls and to ensure their equal rights in career, law and in having their voice heard. We offer

Information on the above is available on our website, FaceBook and Twitter. As Membership Chair, Anne has made a goal of increasing our membership to 100 women by our 100th anniversary in January 2019.

Introduction of the 2017-18 Theme: Pat spoke of the theme for this year’s speaker series: Canada at 150+. This year’s speakers will focus on the history of Canada, its indigenous peoples, and the role of women in shaping Canada to date. She informed us that the November meeting will be held at the Perth County Archives, followed by a tour of the Stratford-Perth Museum – cost is $6 per person if a non-member of the Gallery and Museum.

Interest Groups: Jane Cook, Interest Group Coordinator, welcomed guests and members and invited them to step out of their comfort zone to try a new group or a new skill. She found that strong bonds and friendships grew from the camaraderie of group events, making it an excellent way to become part of Stratford for newcomers and to extend acquaintances among established members. The book clubs have been re-numbered as Book clubs 1 and 2 no longer exist, such that clubs 3, 4, and 5 are now numbered 1, 2, and 3. She concluded by thanking group leaders for their efforts and expertise.

Advocacy: Chair of the Advocacy Committee, Louise McColl spoke briefly about the work of this standing committee of CFUW. The committee meets monthly. As shown in our displays, the committee has been advocating for improved train transportation to Stratford; issues related to our membership in Graduate Women International (GWI); reduction of the use of bottled water at city events; and is currently a partner in a joint venture with Zonta and Amnesty International to showcase an indigenous film at the Queen of the Square on November 29th 2017. Cash donations are gratefully accepted. The Advocacy committee welcomes new members and new ideas.

Introduction of the Speaker: Pat Reavy introduced Carol Huband as this evening’s speaker. She is well-qualified to initiate the series as she is a retired teacher with a passion for history, indigenous peoples and genealogy. Carol was instrumental in researching the histories of many homes in Stratford and in establishing the plaques that recognize the original owners of the home. These hugely popular plaques offer those who stroll about Stratford a fascinating glimpse into the past. She also is involved in Heritage Weekend events that recognize Stratford’s Legacy. In particular, her investigations highlighted the importance of the Annie MacPherson house on Avon St as the major dispersement centre for the British Home Children in the early years of the last century. She was key in having Stratford recognized as a Railway City in 2016 and since 2015, is the President of the Architectural Conservancy of Ontario- Stratford-Perth Branch. 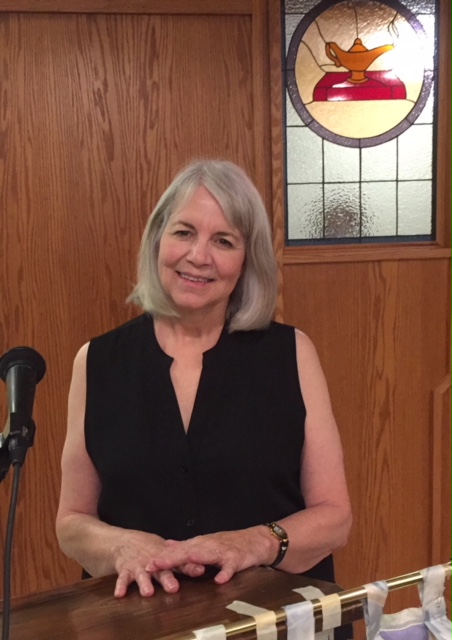 Carol Huband, President of the Architectural Conservancy of Ontario- Stratford-Perth Branch began a well-illustrated presentation with a historical map illustrating the territories of various tribes of Indigenous peoples prior to the arrival of Europeans. The area of Stratford was occupied by the Neutral tribes, a peaceable people related to the Wendat, and were a matrilineal society that disappeared by 1653, being replaced by the Ashinaabe tribe. She then jumped ahead to 1832 to the arrival of the first Europeans, William and Mrs. Sergeant, who built a hotel/inn/tavern at the intersection of Mornington and Huron streets. She went on to tell fascinating details of Stratford’s first families, their residences, and their businesses including the Junction Hotel run by Annie Alcott, the medical practice of Dr. Daisy Macklin, Lucy Cartwright’s famed Meribah Mineral Springs and the Annie Macpherson house for British Home Children on Avon St.

Ms Huband also provided anecdotes concerning the biggest businesses in Stratford. First, the arrival of the railroad companies arrived in Stratford in 1856 the Grand Trunk (GTR) and the Buffalo and Lake Huron (BLHR). In the late 1860’s, Toronto ordered GTR to vacate their Toronto repair shops. Herbert Roberts was selected to locate a new site for the repairs. As he traveled through southern Ontario searching for the perfect locale, he arrived in Stratford. Mayor T. M. Daly invited him to dinner, where he met Mayor Daly’s lovely daughter, and fell instantly in love. He made the decision to locate the shops in Stratford bringing in 100 employees, and 400 families. Second, the furniture industry was shaken when the Chesterfield Furniture Workers, led by a group of women, protested wages and working conditions by going on strike. The army was called in to quell the strike, but the workers prevailed. Thus began a period of significant growth and prosperity that carried the town for the next 90 years