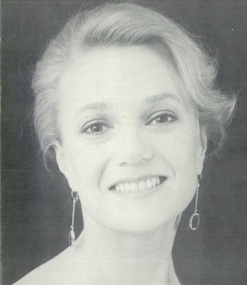 Born in Stockholm, Annette was accepted into the Royal Swedish Ballet School in 1953, where she trained for eight years. In 1962 she was picked from the school to dance the lead role in Prokofiev’s The Stone Flower, a ballet choreographed by Yuri Grigorovich, later the head of the Bolshoi Ballet in Moscow. That same year she joined the Royal Swedish Ballet, dancing in several ballets staged by its Director Antony Tudor, including Scenes from Childhood and also Echoes of Trumpets, which was created for her.

Brian Macdonald became Director in 1964. Annette danced in several of his renowned ballets such as the pas de deux Prothalamion with Bruce Marks (shown on Swedish television), and she created the Princess in Brian’s version of Firebird. She was Juliet in his Romeo and Juliet, Rose in Rose La Tulippe with music by Harry Freedman, and later the woman in Double Quartet and Adieu Robert Schumann composed by R. Murray Schafer. Annette danced many of the classics including The Sleeping Beauty, Swan Lake, Giselle, and the Flower Festival pas de deux with Erik Bruhn.

Her first guest appearance with Les Grands Ballets Canadiens came in 1970 as the Sugar Plum Fairy in Fernand Nault’s The Nutcracker. In 1973, after more guest appearances, she became a permanent member of the company, and was principal dancer until she retired from her dancing career in 1984.  During that career she danced with major companies everywhere, equally accomplished and appreciated in the full classical repertoire as well as in many important contemporary roles. She has appeared in films and television as well as on the ballet stage.

In 1982 she danced in Tokyo at the 2nd World Peace Culture Festival; in 1983 she performed at a gala held to celebrate the re-opening of the Royal Swedish Opera House in Stockholm, a return to her roots.

In 1986, Annette became founding artistic director of Ballet British Columbia.  Since 1987 she has taught and coached throughout Canada, including work with the Royal Winnipeg Ballet, the National Ballet of Canada and its School, and Ballet Jorgen Canada. For 40 years Annette has been a member and subsequently the director of the summer dance program at The Banff Centre. Presently she teaches ballet as guest coach for the Stratford Festival and the Birmingham Conservatory.