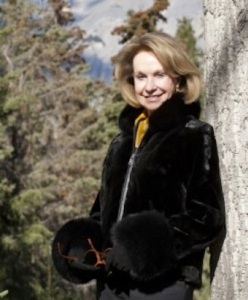 Mary expressed her satisfaction in being able to participate in this year’s program – Women in the Arts, as promotion of women and art have been her twin passions throughout her career.

She provided a brief background of her experience, which included progressively higher level positions at Conestoga College, then Mohawk College, and culminating at Sheridan College, where she was President and CEO for 12 years. She was particularly happy to be with Sheridan College as it is the premier college in Canada for arts and animation. In 1995, she was recruited by Richard Monette to be General Manager of the Stratford Festival, a role she fulfilled for 2 years.

In 1999, she was invited by the CEO of the Banff Centre to replace him, which she did for 12 years. She called this “an amazing opportunity.” Thousands of artists, musicians, writers, playwriters, and other creative people visit the Banff Centre each year looking for an inspirational place to work, where they can test the boundaries of their art among their peers.

The Banff Centre was created in 1933, by a group of thespians. It is situated on Sleeping Buffalo Mountain, where three valleys converge, conferring special status in native culture, making it a powerful place. In 1935, painting and playwriting were on offer as well. Other the years the Centre was administered by the University of Alberta, then by the University of Calgary, but in 1978, it became a ‘stand alone, non-parchment’ institution. The thirteen programs offered at that time included native art. Since the institution does not issue degrees, diplomas, or certificates, there is almost limitless possibilities for what the artist can achieve here, without the constraints of an established syllabus. Each artist has the opportunity to develop their art, using a personalized guide developed by their mentors. Furthermore, it is a residential programme, offering accommodations, sustenance, all materials necessary to the art (within reason). While the artists attending the Banff Centre can be as young as 18(more likely with dancers), most are mid-career artists, but can also be into their 80’s.

In 1999, at the time Mary arrived to take the helm, the Centre was in dire need of refurbishment. Funding was suffering as the triple threat of 9/11, SARS, and Alberta’s sole Mad Cow case discouraged travelers and tourism. She came to find the Centre with non-viable funds, so the Board hired a consultant to help design a fund-raising scheme to raise $5 million, but their report suggested $3 million as an optimistically attainable goal. The report was discarded and they set about to raise $20 million initially, but quickly increased that to $50 million.

Mary suggested that when fund-raising, it is important to hide this fact until at least 70% of the funds are in place, then make a big announcement. With success assured, many private donors will jump on the success bandwagon. To initiate fund development, Mary spent several years cultivating relationships with decision-makers in government, with business leaders, and philanthropists. This was rewarded by a promise of $20 million from the Province of Alberta and $70 million from the Government of Canada, but it was stipulated that additional funds had to come from private sources.

Jack Diamond was hired to design the refurbishment of the Banff Centre. The vision was to make the Banff Centre an ‘essential destination’ for the artist, inspiring creativity. After eight years, the relationship-building and fund-raising culminated in the opening of the Shaw Amphitheatre in 2011. The Shaw family donated significantly to this building and retained naming rights.

Glen Sather, of New Rangers fame, donated a historic Banff home that he owned to the Banff Centre. This gift included all costs associated with the move of the house from Banff to the Centre, which included taking down all overhead wires on the route, cutting the house into seven pieces, loading it onto trucks, transporting it up a narrow mountain road with hairpin turns, and re-assembling it on a prepared concrete pad at the Banff Centre.

The Centre was also gifted with a piece of art created by Brian Jungen. Similarly, the Jim Kinnear Centre was substantially funded with a gift of $10 million. The campaign closed in 2011, having raised over $120 million. At that point, Mary left the Centre, and has occupied her time since doing volunteer work and consulting.

At this point, Mary is somewhat concerned about the dearth of new generation leaders in the Arts. There is very limited potential for training in both experiential art, art education, and business/financial management. There is also a lack of mentoring in the field. In response to questions from the audience, Mary stated that she took a course in financial accounting during her sojourn at the colleges in response to her deficit in training in this area. She also stated that current institutions lack the capacity to mentor and train individuals to move from lower/middle levels to upper management. That it would be necessary to match a trainee with a mentor, but this match would have to be very exact.

Charlotte Gillett thanked Mary for her interesting presentation and informed the membership that Mary had graciously donated her honorarium to the Scholarship Fund.

A snowy view of the Banff Centre.